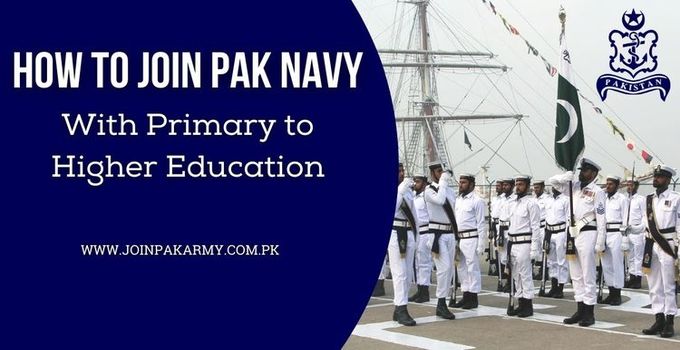 The youth of Pakistan has the utmost desire to Join Pak Navy and serve their nation. For this concern the detailed discussion of different posts and admission criteria for students to Join Pak Navy after matric, intermediate and graduation. Pak Navy is playing the major role in protecting the economic status of Pakistan and also the defence of people living within the country. Pak Navy is paying its services in performing the military exercises to implement the defence policies of the government of Pakistan in the country.

How to Join Pak Navy After Matric?

The youth of Pakistan is allowed by the government to Join Navy after matric. The students are highly eager to know ways to Join Pak Navy and serve their nation by protecting the surroundings through the defence. The students can take admission to the following posts after matric:

The hiring of sailors in Pak Navy is accomplished twice in a year. The students can Join Pak Navy as a sailor by getting training from the boot camp in the New Entry School at PNS Himalaya. After the training course has been completed the students are provided with different branches and sent for further technical training. The candidate is needed to be of 16 to 20 years in age with approximately 65% marks in matric. The sailors can further grow to different branches such as:

For joining Pak Navy as a civilian the students should be of age 16 to 20 with 5.4” height. The educational requirement includes 65% marks in matric and gets training as a cadet in boot camp at New Entry School. The civilians can get a lot of benefits including 50% concession on travelling, engineering diploma, two months leave with one free train travel voucher once in a year and many others. Civilians can Join Pak Navy in different divisions such as mechanical, electrical, construction and transport divisions etc.

Read:- How to Join PAF

How to Join Pak Navy After Intermediate?

For getting promoted to mechanical branch officer the students need to complete further training for 2 to 2.5 years at the Pak Navy Engineering College in the field of mechanical engineering. The candidates can get certificates relevant to their discipline after completion of engineering Course. The students should be unmarried and 17 to 23 in age. They must have the qualification of HSSC or A levels with at least 60% marks.

The candidates can join the Navy for being a logistic branch officer after the completion of their intermediate studies. For this, the students need to join the school of Logistics and Management that could be affiliated with the Institute of Business Administration. The candidates get training for two years and get a BBA (Hons) degree. The students need to be unmarried and having 60% marks in intermediate along with 17 to 23 years in age.

Read:- How to Join Pak Army

How to Join Pak Navy After Graduation?

The candidates can also join the Navy after graduation. The students who have been graduated can get admission in short Service Commission Course, also can apply in different ranks in Pak Navy. These short courses open every year for students who are dying to join the Navy and proceed in their passion. Following are the different branches in which graduates can take admission in Pak Navy:

The candidates should be not more than 28 years in age and they should be unmarried. The height of students need to 5.4” and they must have qualification in Physics, Mathematics, Chemistry, English and Urdu with at least second division from any recognized university of the country. The candidates need to pass the interview and entrance exam for getting admission in Pak Navy after graduation. The two years training course is necessary to get Pak Navy jobs and students will now be able to pay their services.

For getting admission to a special branch in Pak Navy the candidate must have qualification in at least second division from any recognized university in different disciplines such as Computer Science, Software Engineering, Computer Technology etc. The age of students should be between 20 to 35 years with 5.4” as minimum height. The candidates need to accomplish their two years training course with at least 60% marks.

The candidates who want to join the Navy after graduation should have age between 25 to 40 years. The students should be qualified in law degree from the any recognized university of Pakistan. The candidate should be a practicing member of the bar so he should have some experience. The students will indulge in further two years studies to join Pak Navy and get relevant certificates for their further qualification.